and this is how he remembered her (waiting for him)
1997
box, photograph, text rearranged from Gustave Flaubert's "Madame Bovary"
5" x 3" x 2.5"
For a period of time, I felt that everything in photography had already been done. I started reading to keep myself from thinking about what little artwork I was making. When I finished a book, I started ripping out the words and rearranging them into a new story, which in a way was still a variation of the same story. The right photograph would happen to come into my possession, like this one. The words and image were combined in this little "bruise box". Hidden until opened.

Text reads:
she was so sweet and pretty, but she no longer made any impression on him. Her attachment to him was a thing he hardened his heart against she was in love and he was not 'Til tomorrow! she said in a final kiss and she watched him go. A long time she stood there, thinking of him He had come to say good-bye but did not tell her. It was the last time and she didn't know
PREV / NEXT   13 / 24
BACK TO OLDIES BUT GOODIES 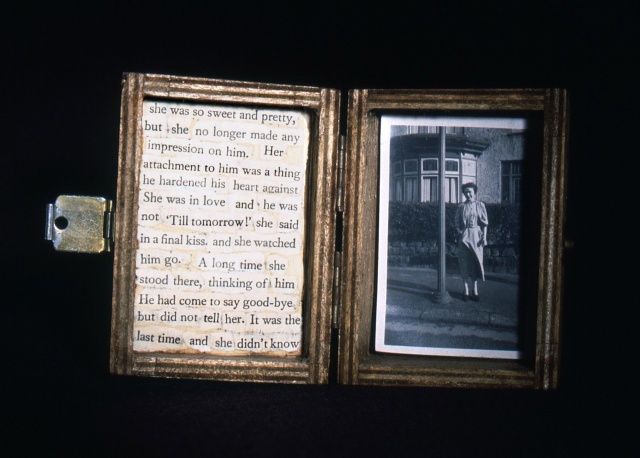